My surgery is done and everything went according to plan. Believe me, I was just thrilled to wake up in the recovery room.

I think the surgery was the “easy” part  because all I did was lay there on the table while the surgical team worked with “Steve” the robot. Yes, this is the space age, and “Steve” the robot had his tiny robotic extremities in me. Before going under, I asked the surgical team if the robot had a name…they laughed and one of the team said his name was “Steve,” which sounded like a fine name to me at the time; better than “Zelda” or “Morpheus” or “Octagious Two.” “Steve” is a comforting name with a sense of normalcy.

But Steve doesn’t work alone. I believe he’d have to have a permit for that sort of thing and those just have not yet been approved and printed up in quadruplicate by the FDA.  So Steve was guided by my talented surgeon, Dr. Melissa Edwards. She sat at a console and used her hands to guide Steve. There was a HUGE screen in the room, and I’m guessing that’s where a video of the surgery could be seen by all. Seriously, I think it was at least 6 or 7 feet across. Of course, everything in the surgery room looked big and scary to me at the time. Even Steve seemed quite large. I believe he could reach the ceiling (and it wasn’t an 8 foot ceiling to be sure).

I think of the Star Trek movie where Dr. McCoy is back in the year 1990-something, walks into a hospital, sees an elderly patient on a gurney in pain and most likely dying, says how barbaric the medicine of the time is, waves his medical instrument over the man….and wa la!…the guy is cured of whatever disease he had. Love that.

Now the real work begins! Or at least my part of the real work. I’m moving pretty slow, no lifting, no driving, no housework (darn it!). But seriously, for those f you who know me well, this isn’t exactly going to be easy…and I’m not talking about the pain. I’m talking about the boredom! Today I’m 5 days post-surgery and feeling pretty good, at least from the neck up. So as soon as I’m a little stronger, I hope to be able to jump into some of those sewing projects I’ve been waiting all year to do. At least that’s what my brain tells me I can do! My body may have other ideas. So it’s one day at a time.

But I have a HUGE support team! A big thank you to all my friends who are bringing us food every day. It is such a wonderful gift! Joyce W (formerly Joyce M) who organized all this for us…thank you so much! I never realized how helpful it would be. Having fresh, homemade meals magically arrive at our door is absolutely what we need right now. Neil and I are so enjoying being spoiled in this way. So thank you – and you know who you are!!

And now I think it’s time for a rest. Happy quilting!

18 Replies to “On The Road To Recovery”

What's on SALE at Cricut.com?

Some of my longarm designs 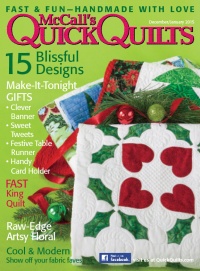 My Apron in Generation Q Magazine!

My Apron in Generation Q Magazine!